skip to main | skip to sidebar

Single & Cynical: A Cautionary Tale (My Brief Bout with a Cyber Predator)

About a week ago I was contacted via Facebook by a guy named Clark.  I got a bizarre, lengthy message about how he stumbled upon my profile and had this feeling he needed to talk to me.  He fought with it for several days before feeling "prompted" while in the temple to share with me a quote from the prophet. I was moderately weirded-out, but politely returned pieces of conversation... eventually finding him to seem somewhat normal.

A few days later, I actually looked at his profile. It was perfect. Too perfect.  He is a recent widower with a beautiful two-year-old daughter who is newly returned to Facebook after accepting a new job as a pediatric oncologist at Primary Children's Medical Center in Salt Lake City where he performs many surgical procedures.  He had a list of degrees and past work history including Harvard and UCLA.  Not bad for a 32 year old...Riiiight...

More confusing was that his friends list was blocked and we had no friends in common.  When I asked how he "stumbled" upon my profile (still haven't figured this one out) his answers were vague... but no doubt Fate had a hand in it!  The friends that did make comments on his profile wrote things that were remarkably similar to his own, and friends sharing his last name had equally short-lived, picture-perfect profiles.

During a slow day at work, I decided I would Google him.  Someone with such credentials should have plenty of information floating around out there. Nothing.  Next I went to the website for the Primary Children's Medical Center, only to find that there is no Clark Wayment on their staff.  Interesting.

Out of curiosity, I looked up "pediatric oncology" (it was a VERY slow day) on Wikipedia.  I learned that surgery is a last resort in pediatric cancer and pediatric oncologists avoid it, preferring chemotherapy and radiation treatment. Fun fact.  The following conversation ensued that day: 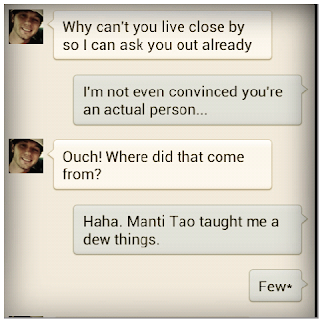 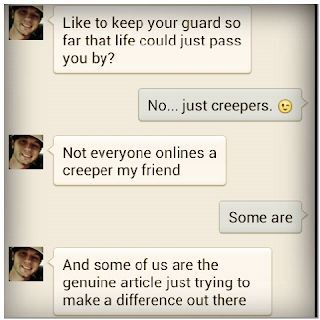 (I'm aware I spelled Te'o wrong. Not the point...) So true, though.  Who was I to judge? He's just a single dad trying to do good. Far be it from me to rain on that parade.

This afternoon I mentioned to my sister and sister-in-law... which of course meant we were going to look into it.  I Googled him once again... this time yielding different results.  The very first page suggested was this page. From the comments we learn that he has used several different names, but all with the same sad story... creeping out women on the Internet.  At first I thought I would write a super snarky message (as is a personal strength of mine.)  Then I thought, "What if I could outcreep him?!"  Brilliant! 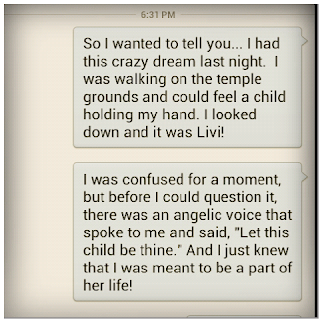 Honestly, I thought this would do the trick.  Instead he just sent me another photo of her.  I had no choice but to lay it on thick.  When could we meet?  He's every girl's dream!  Who wouldn't want that? And most importantly... How can you argue with... revelation?! His response?

"That's what led me to you from the start!"

I finally saw my opportunity and took it. 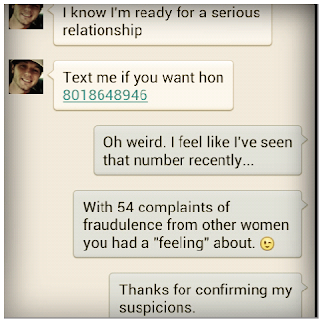 I've never seen a profile disappear so quickly, though I'm sure he has plenty of them!
I can't help feeling just a little bit proud of myself for not being suckered in.  And yet once... just once...
I would love to be wrong.

Ami
Slightly sarcastic but 100% real. I'm a Christian, a rescuer of treasures, a nervous wreck and an aspiring optimist. Not a "mommy blogger." Just a mommy. And a blogger. Life is ugly and beautiful, heartbreaking and wonderful, hilarious and frustrating, crazy and incredible. Let's talk about it.